Valaciclovir is a nucleoside inhibitor of DNA polymerase of herpes viruses. It blocks the synthesis of viral DNA and the replication of viruses. In the human body is converted into acyclovir and L-valine; As a result of phosphorylation from acyclovir, active acyclovir triphosphate is formed, which competitively suppresses the viral DNA polymerase.

Valacyclovir is a prodrug, derivative of acyclovir. Valacyclovir is an ester of acyclovir, the L-valyl form. Both acyclovir and valacyclovir belong to the class of anti-herpes agents, herpes simplex virus guanosine nucleoside analog DNA polymerase inhibitor and herpes zoster virus nucleoside analog DNA polymerase inhibitor. Other drugs in this class are famciclovir, penciclovir, ganciclovir, valganciclovir, cidofovir, and foscarnet. The drug valacyclovir was discovered by Burroughs Wellcome Company, now GlaxoSmithKline in 1988, and was patented then. The patent expired in June 2009. 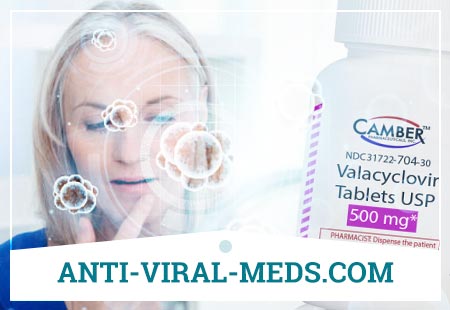 Valacyclovir hydrochloride is administered orally. It is then absorbed rapidly, and almost completely converted to its metabolites, acyclovir, and L-valine by first-pass metabolism in the liver and intestines. Oral bioavailability of valacyclovir is estimated to be between 54-70% whereas that of acyclovir is estimated to be only 15-20%. The bioavailability is not in any way affected if it was taken with food, of any kind. The peak plasma concentrations of valacyclovir are generally lower than 0.5mcg/ml in serum at all given doses.

Valacyclovir has a higher bioavailability than the parent drug acyclovir, which is the advantage of the prodrug. This is due to its extensive first-pass enzymatic hydrolysis in the liver and intestines. This leads to a three to five times higher serum concentration than acyclovir. This bioavailability approaches that achieved by administration of intravenous acyclovir.

Valacyclovir does not accumulate significantly in the body after administration. The recommended dosage regimens are in consideration of healthy adults with normal renal function.

First pass intestinal and hepatic metabolism convert valacyclovir to acyclovir and L-valine. This is done by enzymes, esterases which break the bond holding the valine amino acid to the parent structure, acyclovir. Some of the acyclovir that is generated is then converted to inactive metabolites by aldehyde oxidases and alcohol dehydrogenase. This only occurs to a very small extent. The plasma levels of valacyclovir that has not been metabolized to acyclovir are usually very low. It is usually unquantifiable within 3 hours of dose administration. The cytochrome p450 enzymes do not metabolize either valacyclovir or acyclovir. This goes a long way in reducing the drug-drug interactions expected.

a) Hepatic impairment
Dose adjustment is not recommended in people with liver cirrhosis. It has been shown that the administration of valacyclovir hydrochloride to patients with liver disease, the rate of conversion of valacyclovir to acyclovir is affected, but not the extent. This can be explained, as the converting enzymes, esterases, are available in the intestinal mucosa as well as other tissues in the body. It is for this reason that dose adjustment is not necessitated.

b) Renal impairment
Dose adjustment is necessary in this case. A study using volunteers with end-stage renal disease showed the necessity of adjusting doses. The estimated half-life of valacyclovir hydrochloride administered to these volunteers was 14 hours, which is an estimated 4.2 times more. During dialysis, the half-life was significantly reduced to about 4 hours. This means that around 33% of acyclovir in the body is removed during a 4-hour dialysis session.

d) Geriatrics
Dose adjustments may be necessary for geriatric patients. This depends on their renal function results. Studies have shown varied pharmacokinetics of valacyclovir hydrochloride in geriatric volunteers depending on the underlying renal function. 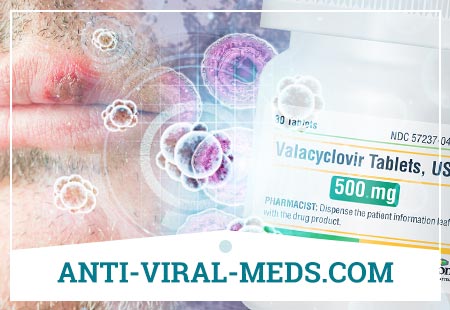 In this section, I will discuss the active component in serum acyclovir. Drugs that affect the renal excretion implicated to have a great effect on acyclovir in serum.

Cimetidine
After a single 800mg dose of cimetidine, the Cmax of acyclovir (from valacyclovir hydrochloride administration) is increased by a mere 8% while the AUC increases by 32%

Antacids
Co-administration of antacids with Al3+ and Mg2+ had no effect on the pharmacokinetics of valacyclovir hydrochloride.

Probenecid
After administration of probenecid 1 gram, the Cmax and AUC of acyclovir after one dose of 1 gram valacyclovir hydrochloride, increased by 22% for Cmax and 49% for AUC.


Thiazide diuretics
There was no change in the pharmacokinetics.

Pharmacodynamics and mechanism of action

There is no significant pharmacodynamics for the active compound of valacyclovir hydrochloride, acyclovir. This is because there are no human receptors for the drug.

Valacyclovir, as a compound is a guanosine nucleoside analog DNA polymerase inhibitor. Valacyclovir is given as a tablet containing valacyclovir hydrochloride which is then converted to the active compound, acyclovir. Acyclovir is a deoxyguanosine analog that requires specific viral enzymes for its activation. The enzyme required is for the initial activation step, herpes virus thymidine kinase. This enzyme metabolizes acyclovir to acyclovir monophosphate by phosphorylation. Cellular kinases then take over the process and convert the acyclovir monophosphate to acyclovir triphosphate in 2 subsequent steps. Acyclovir triphosphate stops viral DNA synthesis by inhibiting the herpes virus DNA polymerase completely. The triphosphate molecule gets incorporated into viral DNA and stops the lengthening of the strands. The prematurely terminated DNA strand then inhibits DNA polymerase enzyme irreversibly. Acyclovir exhibits more antiviral activity against herpes simplex virus compared to varicella-zoster virus. This is attributed to the more active phosphorylation of the drug by the enzyme in herpes simplex virus.

Herpes simplex virus and the varicella-zoster virus can become resistant to acyclovir (from valacyclovir). This can be as a result of changes in both viral thymidine kinase and the enzyme DNA polymerase. This has been noted in AIDs patients with varicella zoster virus who become resistant to the drug therapy. In these AIDs patients, enzyme thymidine kinase-deficient mutants were found.

Valacyclovir is a generally well-tolerated drug. The occasional side effects that may occur include nausea, vomiting, headache or a rash. These can be treated symptomatically and do not warrant the need to stop therapy.

At higher doses, confusions, hallucinations, and seizures have been reported. Other neurological symptoms include agitation, delirium, and encephalopathy. These neurological symptoms at high doses. They have been observed in both pediatric and adult patients. They occurred regardless of the renal function status. Elderly patients are at a higher risk of experiencing central nervous system side effects. Therapy with valacyclovir should always be discontinued if any CNS adverse effects are observed.

In AIDs patients who received continuous high dosage valacyclovir, at 8grams per day, there was an increase in gastrointestinal intolerance. Also, they were at higher risk of experiencing thrombotic thrombocytopenic purpura, and hemolytic uremic syndrome (TTP/HUS). TTP/HUS has also been observed in patients who underwent allogeneic bone marrow transplant, as well as renal transplant patients. This occurred at the high 8g/day doses. In some cases, this resulted in death. Therefore therapy with valacyclovir hydrochloride should be stopped immediately if any clinical signs of TTP/HUS are observed, or if any laboratory tests are consistent with TTP/HUS.

Acute renal failure has also been reported to occur during clinical trials. This was noted in:

The renal damage caused may be reversible. If a patient is anuric, then dialysis may be indicated. This should be so until they regain their renal function.

Valacyclovir hydrochloride is quite selective in its active form. Since it requires the viral enzyme thymidine kinase for activation, there is no significant damage to human cells. Precipitation of the drug, however, may occur in the renal tubules, damaging the kidneys. In case of an overdose in such cases, there should be close monitoring, adequate hydration and dialysis should be done if warranted as remedies.

Valacyclovir hydrochloride is contraindicated in all patients who have had a previous hypersensitivity reaction to valacyclovir, acyclovir, or any substance in the drug formulation. In case one accidentally ingests a tablet, they may experience anaphylaxis, angioedema, urticaria, pruritus, dyspnea, and rash.

There have been no other drug-drug or drug-food interactions reported that were clinically significant.

Valacyclovir is a pregnancy category B drug. There have been no well-established trials, but it may be used cautiously under a physician's guidance.