Valtrex is an antiviral drug. It is a specific inhibitor of DNA polymerase of herpes viruses. It blocks the synthesis of viral DNA and the replication of viruses. 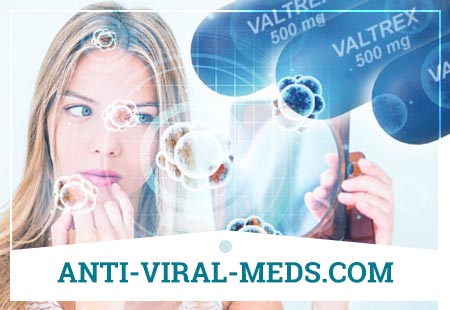 In the human body, valaciclovir is converted into acyclovir and valine. As a result of phosphorylation from acyclovir, active acylglycine triphosphate is formed, which competitively inhibits the viral DNA polymerase. The first stage of phosphorylation occurs under the influence of a virus-specific enzyme. For viruses Herpes simplex, Varicella zoster and Epstein-Barr, this enzyme is viral thymidine kinase, which is found only in cells infected with the virus. For the cytomegalovirus, the selectivity of the drug is due to the fact that phosphorylation is, at least in part, mediated by the product of the phosphotransferase UL97 gene. The need for a virus-specific enzyme for the activation of acyclovir largely explains its selectivity.

Valacyclovir in vitro is active against Herpes simplex virus types 1 and 2, Varicella zoster and Epstein-Barr, cytomegalovirus and human herpesvirus type 6.

A wide study of clinical strains isolated from patients showed that in patients with normal immunity, viruses with reduced sensitivity to acyclovir are extremely rare. Somewhat more often or relatively rarely, these viruses are found in persons with severe immunodeficiency, for example in recipients of internal organs or bone marrow; in patients receiving chemotherapy for malignant neoplasms, and people infected with HIV. Reduced sensitivity of viruses to acyclovir is due to the phenotypic deficiency of thymidine kinase in cells infected with the virus. More rarely, the cause of decreased sensitivity to acyclovir was the latent changes in viral thymidine kinase or DNA polymerase.

Valtrex, indications for use