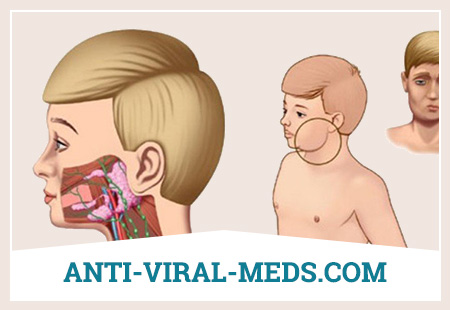 The disease was first described by Hippocrates and allocated them in an independent nosological form. Frequent lesions of the central nervous system and orchitis in mumps are noted by Hamilton (1790).

Mumps virus was first isolated from the patient’s blood by L. Kilham (1949), and B. Bjervat (1973) was isolated from testicular tissue during their biopsy. Fundamental research in the field of this disease was carried out by domestic scientists I.V. Troitsky, N.F. Filatov, A.D. Romanov, A.A. Smorodintsev, A.K. Shubladze et al.

Virions are polymorphic, rounded virions have a diameter of 120-300 nm. The virus contains RNA, has hemagglutinating, neuraminidase and hemolytic activity. The virus agglutinates red blood cells of chickens, ducks, guinea pigs, dogs, etc. In laboratory conditions, the virus is cultivated on 7-8-day-old chicken embryos and cell cultures. Primarily trypsinized cell cultures of Guinea pig kidney, monkeys, Syrian hamster, chicken embryo fibroblasts are sensitive to the virus. Laboratory animals are insensitive to the mumps virus, only in monkeys it is possible to reproduce a disease similar to human mumps. The virus is unstable, is inactivated by heating, by ultraviolet radiation, by contact with fat solvents, 2% formalin solution, 1% lysol solution. An attenuated strain of the virus (L-3) is used as a live vaccine. The antigenic structure of the virus is stable. It contains antigens that can cause the formation of neutralizing and complement-binding antibodies, as well as an allergen that can be used to produce an intradermal test.

The source of infection is only a person (patients with manifest and inapparent forms of mumps). The patient becomes contagious 1-2 days before the onset of clinical symptoms and in the first 5 days of the disease. After the symptoms disappear, the patient is not contagious. The virus is transmitted by airborne droplets, although the possibility of transmission through contaminated objects (such as toys) cannot be completely ruled out.

The susceptibility to infection is high. More often children are ill. Male persons suffer from mumps 1.5 times more often than women. The incidence is characterized by pronounced seasonality (seasonality index 10). The maximum incidence occurs in March-April, the minimum – in August-September. After 1-2 years, periodic incidence increases are observed. It occurs in the form of sporadic diseases and in the form of epidemic outbreaks. In institutions, outbreaks last from 70 to 10 ° days, giving separate waves (4-5) with gaps between them equal to the incubation period. In 80-90% of the adult population, antipartite antibodies can be found in the blood, which indicates a wide spread of this infection (in 25% of those infected, the infection is inapparent). Following the introduction of live vaccine immunization, the incidence of mumps has significantly decreased.

The gates of infection are the mucous membrane of the upper respiratory tract (possibly tonsils). The causative agent penetrates the salivary glands not through the parotid (stenon) duct, but through the hematogenous route. Virusemia is an important link in the pathogenesis of mumps, which is proved by the possibility of virus isolation from the blood already in the early stages of the disease. The virus spreads throughout the body and finds favorable conditions for reproduction (reproduction) in the glandular organs, as well as in the nervous system. Damage to the nervous system and other glandular organs can occur not only after damage to the salivary glands, but also at the same time, earlier and even without damage to them (very rarely). It was possible to isolate the mumps virus not only from the blood and salivary glands, but also from testicular tissue, from the pancreas, from the milk of a woman with mumps. Depending on the localization of the pathogen and the severity of changes in a particular organ, the clinical manifestations of the disease can be very diverse. With mumps, specific antibodies are produced in the body (neutralizing, complement binding, etc.), which are detected over several years, and an allergic rearrangement of the body develops that lasts a very long time (possibly throughout life).

A significant role in the mechanisms of neutralizing the virus belongs to virucidal antibodies that suppress the activity of the virus and its penetration into cells.

In typical cases, the recognition of mumps is not difficult. The defeat of the parotid salivary glands in other infectious diseases is secondary and has the character of a purulent lesion. Other diseases of the glands (recurrent allergic mumps, Mikulich disease, duct stones of the salivary glands, neoplasms) are characterized by the absence of fever and a prolonged course. The most dangerous cases are when the doctor takes for mumps toxic edema of the cervical tissue with toxic or subtoxic diphtheria of the throat. However, a careful examination of the patient, in particular pharyngoscopy, makes it easy to differentiate these diseases.

Great difficulty is the differential diagnosis of complicated forms of mumps, especially if the lesion of the salivary glands is not pronounced or absent.

Mumps serous meningitis should be differentiated from serous meningitis of another etiology, primarily from tuberculous and enterovirus. A thorough examination of the salivary glands and other glandular organs (urine amylase test), the presence of contact with patients with mumps, and the absence of mumps in the past helps in the diagnosis. Tuberculous meningitis is characterized by the presence of prodromal phenomena, a relatively gradual onset and a progressive increase in neurological symptoms. Enteroviral meningitis occurs in late summer or early fall, when the incidence of mumps is sharply reduced.

Of the laboratory methods for confirming the diagnosis, the most conclusive is the isolation of mumps virus from the blood, swabs from the pharynx, secretions of the parotid salivary gland, cerebrospinal fluid and urine. Immunofluorescence methods can detect viruses in cell culture after 2-3 days (with the standard method of research – only after 6 days). The immunofluorescence method allows you to detect a viral antigen directly in the cells of the nasopharynx, which makes it possible to most quickly receive an answer. Serological methods can detect an increase in antibody titer only after 1-3 weeks from the onset of the disease, for which various methods are used.

The most informative is the enzyme-linked immunosorbent assay, later results are obtained using simpler reactions (RSK and RTGA). Examine paired sera; the first is taken at the beginning of the disease, the second – after 2-4 weeks. Diagnostic is considered to be a titer increase of 4 times or more. An intradermal test with an antigen (allergen) can be used. Diagnostic is the transition of a negative sample to a positive one. If a skin test is positive already in the early days of the disease, then this indicates that the person has previously suffered mumps.

Patients with mumps can be treated at home. Hospitalize patients with severe complicated forms, as well as for epidemiological reasons. Patients are isolated at home for 9 days. In child care facilities where a case of mumps has been identified, 21 days quarantine is established. Disinfection in the foci of mumps is not carried out.

There is no etiotropic treatment for mumps. Hyperimmune specific serum did not give a therapeutic effect and did not prevent the development of complications. An important goal of treatment is to prevent complications. Compliance with bed rest for at least 10 days. In men who did not observe bed rest during the 1st week, orchitis developed 3 times more often (in 75%) than in persons hospitalized in the first 3 days of illness (in 26%). To prevent pancreatitis, in addition, you must follow a certain diet: avoid overeating, reduce the amount of white bread, pasta, fats, cabbage. The diet should be dairy and vegetable. Of cereals, it is better to eat rice, black bread and potatoes are allowed.

With orchitis, prednisone may be prescribed earlier for 5-7 days, starting with 40-60 mg and reducing the dose every day by 5 mg, or other corticosteroids in equivalent doses.

With meningitis, the same course of treatment with corticosteroids is used. The proposal to use intramuscular injection of nucleases for the treatment of mumps meningitis has no scientific justification; no one has yet proven the effectiveness of this method. The course of mumps meningitis is favorably influenced by spinal puncture with the extraction of a small amount of cerebrospinal fluid. Moderate dehydration therapy is of some importance. In acute pancreatitis, a liquid sparing diet, atropine, papaverine, a cold on the stomach are prescribed, with vomiting – chlorpromazine, as well as drugs that inhibit enzymes, in particular countercal (trasilol), which is administered intramuscularly (slowly) in glucose solution, on the first day 50,000 IU, then 3 days for 25000 IU / day and another 5 days for 15000 IU / day. Locally – warming compresses.

The prognosis is favorable, fatal outcomes are very rare (1 in 100 000 cases); however, the possibility of deafness and atrophy of the testicles with subsequent azospermia should be considered. After mumps meningitis and meningoencephalitis, asthenization is observed for a long time.

For specific prophylaxis, live mumps vaccine from the attenuated strain Leningrad-3 (L-3) is used. Preventive vaccinations against mumps are planned for children aged 15 months to 7 years who have not previously suffered from mumps. If the history is not reliable, the child is subject to vaccination. Vaccination is carried out once, subcutaneously or intradermally. In the subcutaneous method, 0.5 ml of the diluted vaccine is administered (one vaccination dose is dissolved in 0.5 ml of the solvent attached to the preparation). In the intradermal method, the vaccine is administered in a volume of 0.1 ml with a needleless injector; in this case, one vaccination dose is diluted in 0.1 ml of solvent. Children in contact with mumps who have not been ill and have not been vaccinated before can be immediately vaccinated with a mumps vaccine (in the absence of clinical contraindications).